We are extremely proud that 2012 Paralympic Bronze medal winner Rob Womack has taken the opportunity to join Team Hybrid as an ambassador for our company, to help spread the word about the benefits of our handcycle range in helping keep fit and having fun. Rob a paraplegic since 2003, first invested in a Coyote manual handcycle, then went on to own a Viper power cycle and is now the proud owner of a Cougar power assisted handcycle.

Shot Putter Rob, first tried the sport at Stoke Mandeville Stadium, the birthplace of the Paralympic movement and he has been competing ever since. He represented Great Britain for the first time at the 2006 IPC Athletics World Championships in Assen, The Netherlands.

After narrowly missing out on going to the 2008 Beijing Paralympics, Rob made his Paralympic debut in London 2012 and produced a personal best throw of 11.34m in the F54/55/56 Shot Put to claim the Paralympic bronze medal.

Rob is using his Team Hybrid Cougar power-assisted handcycle for his cardio vascular training for Rio, 2016..

It’s great to have Rob on board. 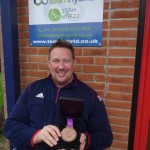 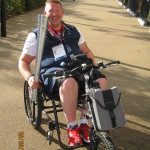 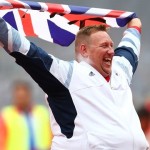