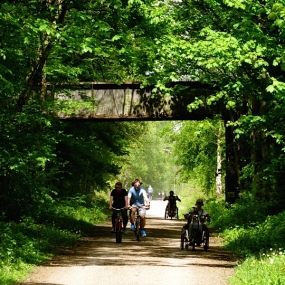 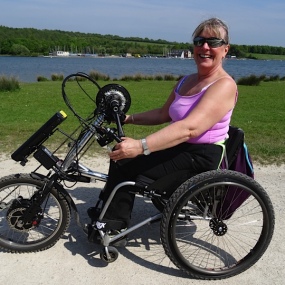 Gillian and Jane had raised funds for various charities individually before coming together to form Accessible Derbyshire in 2014 with the aim to raise over £1 million. Their task to take on a much bigger challenge of getting the whole of the Peak District accessible to all. A great deal of the focus is on facilities for disabled children, suitable changing facilities and also making sure that the various parks have available devices to make them accessible such as the Cougar power assisted handcycle and the Viper power cycle.

May 15th and Team Hybrid’s General Manager Rob Shaw travelled to Derbyshire to take part in a charity event organized by Roy Taylor a Reserves Manager for the RSPB in Northern England and Chris Christou CEO at Mybility All Terrain Wheelchairs. Their aim to follow the Trans Pennine trail from Chesterfield to Leeds a distance of 66 miles with the aim of highlighting the challenges that wheelchair users face on these types of paths.

The first leg of the journey was the 19 miles from Chesterfield to Sheffield. Once the interviews with BBC Breakfast who ran a piece on the event were complete, 4 wheelchairs (2x Mybility, 1x Team Hybrid Viper and 1x Team Hybrid Cougar) 2 bikes 4 walkers and one 8 month old in a trailer headed off…

The weather was good and the BBC publicity had done the job and Roy and Chris were spotted on numerous occasions by walkers & cyclists who stopped and made donations to the cause.

The paths and tracks were no problem for the Cougar and Viper (or the Mybilitys) only the occasional A frame or gate that required careful manoeuvring hindering progress on the day. All the walkers took turns to have a rest on the Cougar or Viper but Gillian and Janet rode the lions share, with Janet showing amazing determination to hand cycle the majority of the route without power assistance.

We all safely made it to Rother Valley country park around 11 miles in and our end point, we waved Roy, Chris and team off loaded up the van and headed home.

Three days later, on Monday, Roy and Chris (plus many supporters) finally arrived in Leeds having raised an amazing £3700 with the total still rising.

Donations to this worthy cause can be made HERE;